Elijah Will Be His Name! (Concerning God’s Faithfulness)

Two years ago today (May 23, 2015) Elijah James Erdel was born. As you can see (eating his birthday donut) he is as handsome as he is gifted at stuffing his mouth with food. Being our fifth child, one might think that the delightful parental joy of observing his first encounters, or seeing him develop (physically, emotionally, spiritually, verbally), or hearing him say or do the “darndest things” would have worn off. I can with great pleasure declare, encountering all those things still tickles my heart in ways that few other human activities do.

Recently Elijah has been saying that Jesus is “Up n’ Heaven” and “I go up n’ Heaven” and “Daddy u go up n’ Heaven? His favorite songs to sing randomly are “Invincible” form Christian hard rockers “Skillet” and the old camp song “I’ll Fly Away” or as Elijah sings it “I flyz awayeee”. To hear him, see him, and encounter him is truly a delight (as it is with all our children).

Elijah’s life has been a blessing from the Lord Jesus Christ in many ways. One of those blessings has become a recurrent lesson to me concerning God’s faithfulness. The lesson of which I am writing has to do with my son’s name.

In the earliest days of my walk with Christ, I was drawn to the scriptures concerning Elijah the prophet more than any other Biblical figure (except the Lord Jesus Himself). I could identify with this man of great faith and obedience to God. His ability to hear the the voice of the LORD and declare His word to Ahab, going wherever God commanded inspired me. Elijah trusting God to feed him, raise the dead and bring fire from heaven astounded and challenged me (I Kings 18). The prophet’s fall into despair and depression, at Jezebel’s declaration to kill him, enabled me to identify with him because of my own battles with depression and anxiety (I Kings 19). Elijah’s ride to heaven in a chariot of fire, gave me deepened hope that if I remained faithful (even in times of failure in bringing glory to God), I too would one day be translated when Jesus descends at the last trumpet and the voice of the archangel (II Kings 2; I Thessalonians 4:16). To me it was a “no brainer” my first son would be named after Elijah the prophet.

Upon my wife becoming pregnant for the second time, we began to discuss names. My first choice for a boy was of course Elijah; she on the other hand liked other names, especially Michael. “If its a boy we ought to name him after you” is what she said. I told her, I had not done well with the name, so it had to be Elijah. She returned with this epic excuse “With a name like that he’ll probably get beat up at school”. Of course I told her how silly her argument was. I stood firm. I mean Elijah prayed fired down from heaven, certainly he could take care of a few school bullies with God’s help. In my estimation this should have been enough, but she persisted, so I brought out the big gun… “You know even though John the Baptist father could not speak, he wrote what his son’s name would be, when there was opposition to naming him John. You know honey, it really is the father’s place to name his son”. Not even this unshakable argument could sway her entrenched opposition to the name Elijah. When our first son was born (16 years ago), I demurred to her and we named him Michael. Thankfully he has done better with than name than I.

Three years later, as Kim was again pregnant, she very reluctantly agreed that if we had a boy, I could name him Elijah. Praise God we had an Abigail. Could you imagine who would have been my wife’s least favorite kid, had Abbey been born a boy? After Abigail was born (13 years ago), the Lord would use 9 years to deepen our marriage and tightly knit our family together in Christ, until Kimmy was with child once more. This time around she came to me with great happiness and said told me if we had a boy we would call him Elijah. I was so delighted. It seemed the Lord had ordained this name for this time. Until we learned we were having a girl. My wife was instantly concerned I would be disappointed, but how could I be disappointed in receiving a child from the LORD, regardless of its sex. As you can see in the photo there is nothing to be disappointed in concerning Ellie Mae.

Contrary to what one might think, when Kim became pregnant for the fifth time, I was joyful and a bit anxious. My wife and I were 41 and although Ellie Mae is a blessing, becoming parents of a newborn after 9 years off, took all our strength and the fullness of the Holy Spirit. “Could we do this once more and maintain our sanity?” was a passing thought.

In spite of these meanderings of the mind we went to the ultra sound in the middle of December 2014. On that great day I saw what was missing for the last 14 years before anyone else did, while we were in the ultra sound. I think the tech slow

ed her footage down on purpose so I could see it… “Wait… did I just see it… is it what I think… YES, YES, its a… Penis”. A few minutes later the tech asked if we wanted to know and it was confirmed: It was a penis, we were having a boy!!! His name would be Elijah.

That very night I had sent out the ultra sound crotch shot of my son, with an arrow pointing to the evidence and the declaration “Its a boy”. My poor wife was a little embarrassed, but I was stoked, Elijah would be arriving in 5 months. The next day, in what was one of the warmest Decembers on record in upstate New York, and as I walked home from work at the church, I began reading my Bible in Jeremiah. Less than a quarter mile from home I read these words.

Jeremiah 1:4-5 (NKJV) Then the word of the Lord came to me, saying: “Before I formed you in the womb I knew you; Before you were born I sanctified you; I ordained you a prophet to the nations.”

Upon reading these two verses I stopped on the side walk, recognizing the presence of the LORD; then He spoke to me.

“The reason you could not fully forget the name Elijah, was that I placed his name upon your heart. Your son Michael was intended to be Michael”.

In that moment, I knew I had mistakenly blamed my wife for not allowing the use of the name Elijah. Now I was going to find out why.

“Before I formed your son Elijah, in your wife’s womb, I knew him. Not only did I know him, but I set him apart to be my servant”.

By this time tears were streaming down my face, as cars were zooming by me on the right. I turned toward the empty field off to my left, unable to move ahead. Then He spoke once more…

“You had lost hope in my promise to you in the name Elijah, but when you could not carry it, I carried it for you for I AM faithful”.

As the Spirit of the LORD finished speaking to me, I was off like a shot running the rest of the way home. The Lord continued to turn things over in my mind. How many times had I wanted to quit, almost listening  to voices telling me to give up ministry? How many times had I prayed the Lord would take me home (like Elijah), not wanting to face what I perceived as failures to glorify Him, 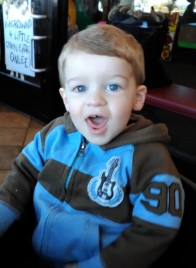 or my inability to bring His kingdom to where I was ministering? At that moment I knew the word of God which had been anchoring my soul throughout my Christian life… “Now to Him who is able to keep you from stumbling, and  present you faultless before the presence of His glory, with exceeding joy” (Jude 1:24).

Let me say that my son’s name “Elijah” will continue to remind me of God’s faithfulness. This is not just to me, but all of us who endeavor to follow Christ. Times and trouble come. We wallow at times in our failures and weaknesses and wounds, yet there is One who is sustaining us. There is One who is holding us together. This Jesus is before us and behind. He is the Light who lights the darkness around us. He is God’s presence in the valley of the shadow of death. He is the very fullness of God in bodily form and in His promise to never leave or forsake us, He not only holds us up as individuals, but He holds to His promises when our grip is waning. Jesus the King of Kings and LORD of Lords is Faithful!!!

Mike is a pastor with The Assembly of God Fellowship. He is the lead pastor at Encounter Church in Fostoria Ohio. His desire is to encourage the Church of Jesus Christ, and declare God's hope through His Son Jesus, to a world which is long on excuses and short on hope. Mike has experienced the truth that when we kneel before Christ, surrendering to Him as Savior and LORD, being led and empowered by His Spirit. To Jesus Christ be all glory and honor.
View all posts by Michael J Erdel →
This entry was posted in "Kid's say the darndest things", Ahab and Jezabel, Elijah the Prophet, God's faithfulness, I Kings 18, I Kings 19, Uncategorized. Bookmark the permalink.

1 Response to Elijah Will Be His Name! (Concerning God’s Faithfulness)