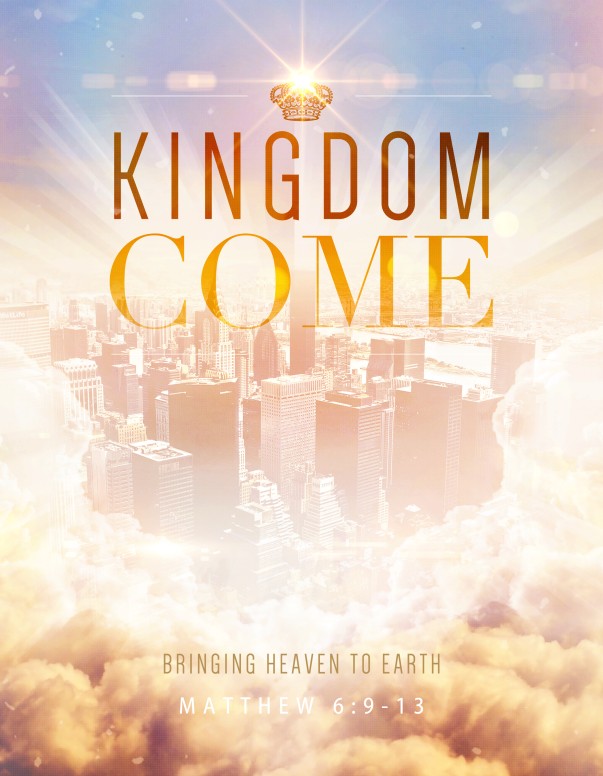 The “Lord’s Prayer”, as taught by our Savior, is a pattern (or outline) of our communion with God in prayer. Our prayer ought to always begin and be maintained in awareness of the awesomeness of our Father’s character, as revealed in His “Hallowed” name. As we discovered last week, we need to intentionally take time to meditate on “The Name’, for in it God communicates that He exists to give those who fear Him: healing, atonement, sanctification, peace, His presence, His power and protection (and many other promises). In His name we can expect every prayer according to His will to be heard and answered (I John 5:14). (to read last weeks article on “Father! Hallowed is Your Name”, click the title in blue)

How we pray  is of great importance, and it is to this end, we look to the next section of Christ’s outline for prayer…

(Matthew 6:10) Your kingdom come, Your will be done on earth as it is in heaven.

As with the first verse of Jesus’ prayer instruction, where we can miss the significance of His name and its relation to our praying, we can also miss the important precept of prayer communicated in verse 10. In order to understand this truth, we must understand Christ’s position and ours in relation to each other.

From the scriptures we know that Jesus at this very moment is seated at the right hand of the Father (Hebrews 1:1-3). We also believe that Jesus the Messiah is interceding for us before the Father and ministers as the true High Priest after the order of Melchizedek (Hebrews 7:13-25). In conjunction with His position in heaven, we understand that our Savior dwells in His manifest presence, in the midst of His church: the body of Christ (II Corinthians 6:16-18); by the Holy Spirit Jesus promises to dwell “with” and “in” every believer (John 14:21,23; Colossians 1:27). These truths are God’s reality in Christ Jesus our Lord, and in no way contradictory.

When considering our position in relation to Jesus it is important to affirm that His desire is to be “in” us, as well as having us dwell in the midst of His immeasurable person. The former takes place when we are Baptized by Christ into the Holy Spirit. The latter occurred when we received the fullness of His atoning death and resurrection on our behalf, through repentance and faith (Corinthians 12:12-14). These truths once more are in no way contradictory. Yet in regard to Jesus’ instruction to pray for His “kingdom come” and His “will be done, on earth as it is in heaven“, we need to consider one more reality of our position in Him.

(Ephesians 2:4-7) 4 But God, who is rich in mercy, because of His great love with which He loved us, 5 even when we were dead in trespasses, made us alive together with Christ (by grace you have been saved), 6 and raised us up together, and made us sit together in the heavenly places in Christ Jesus, 7 that in the ages to come He might show the exceeding riches of His grace in His kindness toward us in Christ Jesus. 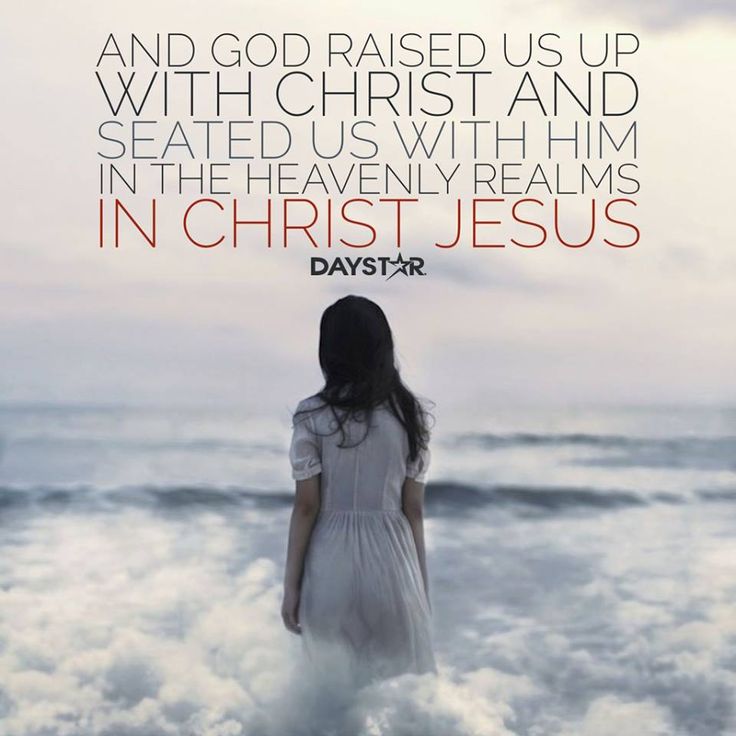 If not careful, we can read verse 7 and assume that our being seated with Christ is for a future time only. This would be a tragic error, as our being seated with Him in heavenly places is a present tense position. We understand this because the word “sit” in verse 6 is in the present tense in the scriptures original language. Therefore, not only are we in the midst of Christ on earth, as we continue to dwell in the body of Christ, we are also in Him  in heaven, as He ministers in the heavenly tabernacle.

Consider some of the implications, such as when we may sin. We already understand that in His omnipresence, our sin is committed in His sight (Psalm 51:4). Yet that is not only from the perspective of God’s omnipresence in His created universe, but from the perspective that we literally are sinning, or being carnal, or apathetic, or neglectful; as we are seated “in” Christ in heavenly places. If you are sweating a bit, so am I. Thank God for His mercy and instruction when we fall “If you confess your sins, He is faithful and just to forgive you and cleanse you from all unrighteousness” (I John 1:7, 9).

HOW THIS RELATES TO PRAYER

The redeemed of the Lord Jesus are in such a unique and privileged position, where we literally are able to bring God’s Kingdom to earth. One need only to have 1/2 a clue in the area of spiritual discernment, to grasp how much this world needs to encounter the kingdom of God. When Jesus walked this earth, He was and is the kingdom of God, as its only King. His first message was “The time is fulfilled, and the kingdom of God is at hand. Repent and believe the gospel” (Mark 1:15). Before Jesus death He prophetically announced the reality of the kingdom of God, after He would complete His work…

Simply put, Jesus’ declaration was and is fulfilled in the baptism of the Holy Spirit at Pentecost. Without getting into an unnecessary debate, it is enough to understand that in each believer being filled with the Holy Spirit, the kingdom of God has come. In those redeemed and full of the Holy Spirit, they literally become a highway on which King Jesus travels to manifest His resurrection power, in salvation, deliverance, sanctification, and healing. This is how the kingdom will comes and is done. Yet it is not enough to proclaim it. Bringing His will and Kingdom authority to the earth is a battle against dark and supernatural foes. We do not wrestle against them openly, but in the secret place.

(Matthew 6:6-7) But you, when you pray, go into your room, and when you have shut your door, pray to your Father who is in the secret place; and your Father who sees in secret will reward you openly.

Everyone who wants that open reward, raise your hand! But let’s remember that does not take place unless the battle is won in prayer first. Consider for just a moment the prophet Elijah (I Kings 17 through 19). In chapter 18 of I Kings, Elijah prays a simple 2 and 1/2 line prayer, which God answers with a pillar of fire from heaven in the sight of the entire nation of Israel. That sounds strikingly like an OPEN REWARD, and it was an open reward. Elijah’s confidence in God answering him was cultivated in the secret prayer relation He had with YHWH, where every need and ask was answered supernaturally. The kingdom was manifest on earth. This is how our position in Christ, seated with Him in heavenly places, relates to “Thy kingdom come, Thy will be done on earth as it is in heaven”.

Prayer is not a list, but our speaking to God concerning the needs of our brethren and of those around us that are not even in the kingdom. In speaking to Abba about the need, we ask for wisdom to pray according to His will (James 1:5; I John 5:14). As we wait on Him, the Holy Spirit (the Spirit of King Jesus) reveals how the need is true in heaven. Once we know the way King Jesus sees the situation or circumstance, we pray accordingly. You’ll find the more you operate in this manner, the more supernatural answers you’ll receive; for God is not into doing things that humans produce, He does things that are uniquely Him . A practical example is in order.

Let’s consider division leading to splits in fellowship in churches, which is a major problem in the church in America.  The kingdom way to deal with this is “to let all bitterness, wrath, anger, clamor and evil speaking be put away; with all malice as well” and “to be tenderhearted and forgiving, just as God forgave us in Christ Jesus” (Ephesians 4:31-32). As a pastor I have spoken that specific passage to many a soul embroiled in conflict and divisive behavior. Guess what? Often times speaking it is not enough. Therefore, we must approach Abba for power, and a pathway to have the kingdom will and power in the Ephesians verses come to earth.

We approach our Father, and speak concerning the trouble. If we do not know why the division exists, we ask for wisdom. He may reveal a hidden sin, a demonic entity seeking to wreak havoc, a lack of the fear of the LORD, a need for deep healing in one or both parties, a lack of Christian love, or the need for discipline by the Holy Spirit alone. Once we ascertain the need we ask Him to do what only He can do and avail ourselves to be of service, if He instructs. This is how the kingdom will is done on earth, as it is already done in the fellowship of the saints in heaven.

The whole point of the example is to say, its not as easy as stating the problem and asking God to do what you or I think should happen. In Christ, God literally calls on us to manifest the kingdom of God on this sin cursed earth, for His glory.

Let’s face solid truth. Christ’s kingdom and will are unopposed around His throne, where angels and powerful creatures are 100% desirous to obey and carry out God’s commands; it is their delight. Jesus Messiah is unchallenged in eternity, yet because of Satan’s rebellion, and man’s subsequent fall, all of creation has been infected with the curse that rebels against God’s rule.

(Romans 8:20-21) For the creation was subjected to futility, not willingly, but because of Him who subjected it in hope; because the creation itself also will be delivered from the bondage of corruption into the glorious liberty of the children of God.

Reading the underlined portion of the passage above, it sounds an awful lot like “Thy kingdom come, Thy will be done”, does it not? And although this liberty will not fully be realized until the new heavens and the new earth, God wants both His eternity and His creation to be in seamless union; this is realized in the redeemed who pray, walk by faith and seek obedience to His commands.

Have you ever considered how important our  kingdom prayer is? It is time we all do, for TIME has had its moment (in light of eternity), and one way or another God will have His sovereign rule and His glorious kingdom shining with the Love of Christ.

Mike is a pastor with The Assembly of God Fellowship. He is the lead pastor at Encounter Church in Fostoria Ohio. His desire is to encourage the Church of Jesus Christ, and declare God's hope through His Son Jesus, to a world which is long on excuses and short on hope. Mike has experienced the truth that when we kneel before Christ, surrendering to Him as Savior and LORD, being led and empowered by His Spirit. To Jesus Christ be all glory and honor.
View all posts by Michael J Erdel →
This entry was posted in Matthew 6:10, on earth as it is in heaven, That kingdom come, thy will be done, Uncategorized. Bookmark the permalink.

3 Responses to Father, Your Kingdom Come…