“Behold the days are coming,” says the LORD GOD, “That I will send a famine on the land, not a famine of bread, nor a thirst for water, but of hearing the words of the LORD. They shall wander from sea to sea, and from north to east; they shall run to and fro, seeking the word of the LORD , but shall not find it.”

Amos the prophet ministered before the Babylonian captivity of the Jewish people. What difficult days the prophet foretold would come. The first significant fulfillment of this prophecy would come while the Jewish nation was captive in Babylon. The second time would be during the intertestamental period of approximately 400 years. This period, often referred to as “400 Silent Years”, took place as the conclusion of Malachi’s prophecy and the advent of John the Baptist’s ministry.

Note, I did not write, when the gospels were written down. This is significant for a “famine” of God’s word has little to do with not having the written word of God. A “famine” of “hearing the word of the LORD” deals occurs when God withholds His inspired and anointed direction through a prophet, priest, or king (a minister).

It is rejection of God’s anointed word that leads to a famine of hearing it, as described in Amos’ prophecy. When the people of God reject God’s real time leading and revelation through prophet, priest, or king, He withdraws His illumination. In these times, no matter how long it has been or how strong the desire in the people to hear a word from the LORD, they will not find satisfaction until His leading is all that they desire.

In these times the LORD declared they would “wander from sea to sea”. The phrase “from sea to sea”, refers to one side of geographic Israel (the Mediterranean Sea) across to the other side of geographic Israel (the Dead Sea). Their manner of travel would be to wander or “to reel” from side to side and backward and forward, like a person malnourished and struggling to find nourishment. To wander implies directionless, confused staggering, from having no word of Life.

Note also the direction from the Mediterranean Sea to the Dead Sea is west to south. This is important for when not finding the word of Life, they would panic and begin to “run to and fro”; “from north to east”. God’s people would crisscross the nation looking to hear a word from the LORD, that would not come. Remember it was not that there was not any written word, because they had the written word. The problem was that God was not directly speaking to them through an anointed prophet, priest, or king, because they had been rejected. Why did Israel need a famine of hearing the word of the LORD? several reasons can be offered.

THEY LIVED TRUSTING IN HUMAN ALLIANCE RATHER THAN YHWH

“Woe to you who are at ease in Zion, and trust in Mount Samaria, notable persons in chief nations, to whom the house of Israel comes”.

The southern kingdom of Judah (Zion), whose kings were from David’s line, trusted in their alliance with the northern kingdom of Israel (Mount Samaria), a truly ungodly kingdom. Together they pompously saw themselves as notable people in the world of nations. This alliance brought much wealth and put them at “ease”, to which the LORD pronounced “Woe” upon them. This is never good. What occurred is that in this alliance, they no longer lived in dependence on God. Judah has made alliance with a compromised sister nation.

Rather than paying a price, they had apparently, at least in their own judgment prospered; but let us remember material prosperity is not an automatic indication of being blessed by God. In fact, this kind of prosperity usually leads to the spiritual down, when concerning the redeemed of the LORD.

(Amos 6:3-8) Woe to you who put far off the day of the doom, who cause the seat of violence to come near; who lie on beds of ivory, stretch out on your couches, eat lambs from the flock and calves from the midst of your stalls; who sing idly to the sounds of stringed instruments, and invent for yourselves musical instruments like David; who drink wine from bowls, and anoint yourselves with the best ointments, but are not grieved for the affliction of Joseph. Therefore they shall now go captive as the first captives, and those who recline at banquets shall be removed.

In the passage above we can see the fruit of prosperity in people of faith, when not on guard. Very easily seen is a society of people of faith in YHWH who become insensitive to the Word of the LORD, because prosperity has led to.

The culture raised from prosperity made them insensitive to God’s word, but what’s more, it made them not want to hear His voice of direction. Now this did not mean they did not have the written word, because they did and they would try it from time to time. The problem is that the written word became a source of legalistic affirmation and pride:they read the word, it made them spiritual, or so they thought.

Essentially God brought this famine of hearing the word of God, because they diminished what His word was intended for. We ought to be careful we do not fall into the same error.

CAN CHRISTIANS FALL INTO A FAMINE OF HEARING THE WORD OF GOD?

Whether those who have been redeemed can remain or fall into a carnal state, ought to be unquestioned in the scriptures. Beyond this potential we must levy to facts. The first is we live in the kind of culture described above and secondly the N.T. is filled with instructions concerning how we handle the word of God, for the purpose of it being engrafted into our person (James 1:21) — That we would be doers of the word, not only hearers (James 1:22) — That we would grow into mature Christians (I Corinthians 3:1-3) — That we grow in discernment, having exercised its use in life (Hebrew 5:12-14).  The list could include many others, but for now, it is important to remember that the word of God is elemental in our being born again…

(1 Peter 1:22-24) Since you have purified your souls in obeying the truth through the Spirit in sincere love of the brethren, love one another fervently with a pure heart, having been born again, not of corruptible seed but incorruptible, through the word of God which lives and abides forever 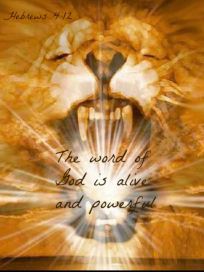 It is important to understand that the incorruptible seed, “the word of God”, is not defined as an intellectual element but a spiritual one; as we know being born again is a supernatural occasion. This does not diminish the nature and power of the written or preached word, but emphasizes the need of the Holy Spirit in its receptions. It is also for this reason that “Christians” can read the word of God and still not hear from the Lord, just as the Pharisees at the time of Christ. We don’t want to misplace the point of God’s written and spoken word, or like He said to the Pharisees, Jesus may be saying to us “You search the scriptures, for in them you think you have eternal life, and These are they which testify of Me” (John 5:39).

Like the Pharisees and the people to whom Amos prophesied, we can begin to use the written word of God in a self seeking manner, and miss the One who is the Living Word of God, Jesus the Messiah. Let us be careful to understand that hearing the word of the LORD continues after the preacher preaches and after we close the bible in our devotions.

We are to understand, encounter, and adapt to our life circumstances, in real time, as the Holy Spirit leads us by the word of God hidden in our hearts (Romans 8:14, Proverbs 3:5-7). This incorruptible seed is to be the voice of the Lord, and the basis of the transformation of our lives.

1 Thessalonians 2:13 For this reason we also thank God without ceasing, because when you received the word of God which you heard from us, you welcomed it not as the word of men, but as it is in truth, the word of God, which also effectively works in you who believe.

Remember, when Paul speaks of how they received the word of God, he is not referring to their being excited to receive a gift and awarded a Bible, as nice as that would have been. He was referring to their receiving his message concerning Jesus Christ, from the written O.T. on hand, or spoken by him. Essentially they received what Amos’ audience and many “Christians” are missing today: the anointed life transforming and empowered word of the LORD.

In our next post, we will discover ways to help us grow in our desire to hear His word. Until then may God bless you as you consider whether you are truly hearing the word of the LORD.

Mike is a pastor with The Assembly of God Fellowship. He is the lead pastor at Encounter Church in Fostoria Ohio. His desire is to encourage the Church of Jesus Christ, and declare God's hope through His Son Jesus, to a world which is long on excuses and short on hope. Mike has experienced the truth that when we kneel before Christ, surrendering to Him as Savior and LORD, being led and empowered by His Spirit. To Jesus Christ be all glory and honor.
View all posts by Michael J Erdel →
This entry was posted in Amos 8:11-12, famine of the word of the LORD, I Peter 1:22-24, I Thessalonians 2:13, The Holy Spirit, the voice of God, The Word of God, Uncategorized. Bookmark the permalink.