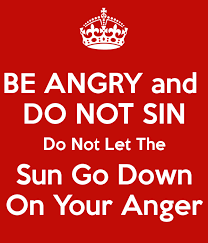 While cleaning out my files, I came across a message I preached in Bedford Pennsylvania, back in August of 2005. The message was entitled “GOD IS ANGRY WITH A CHURCH, THAT IS ANGRY WITHOUT CAUSE”. After 13 years of space from its presentation, I still believe it to be a God anointed message; one very necessary in the Church of Jesus Christ in America, regardless of denominational affiliation. Some suggest God can never be angry at His Church or at the least that the title implies an overstated assumption.

If you are in that crowd, I encourage you to read James 3:13-18 through James 4:1-10. In this passage we encounter a church that was tearing apart at the seams from strife, which could have ended in angry separation, because of the flock’s submitting to the world, the flesh and the devil. God was angry with them.

Even more plain, is the force of the Lord Jesus Christ’s words against His church in Revelation chapter’s 2 and 3. How can one deny God’s anger with His children, when Jesus declares in one place, that unless they repent He “…will come quickly and fight against them with the sword of My mouth” (Revelation 2:16). In another place He proclaims to the lukewarm church that “I will vomit you out of my mouth” (Revelation 3:16).

Why is this so important? Because we are living among millions in this nation, who believe they have the right to be angry if they have to wait too long for their morning coffee at the drive thru (hope that’s not you Christian). In America every slight, pass-over, or unintentional intrusion into one’s personal space is a reason to be angry, yet with our God and Father, this is not the case. Note I did not say, “Don’t ever be angry”, because we can and should be angry over the same issues that anger God; just not carrying out that anger sinfully.

How do we practice this? Take your feelings and the reason for them and submit them to God in prayer. Don’t ever assume you have a right to be angry, just because a persons behavior falls outside of the confines of a passage of scripture; but trust in God with all your heart and do not lean on your own understanding, submit to Him and He will direct your heart and behavior going forward (Proverbs 3:5-7).

As a pastor the last 15 years, I can report that people being angry without a biblical cause, has caused much of the missing power and presence of the Holy Spirit in the body of Christ in America. We have grieved the Holy Spirit, with our angry, entitled, and selfish attitudes toward one another. Several years ago Jim Dobson, the former founder and head for Focus on the Family ministries had this to say, concerning undue anger in the Church.

“Satan’s most successful maneuver in the churches and Christian organizations is to get people angry at one another; to attack and insult our brothers and sisters, thus splitting the body of Christ”.

I would add, this is the same tactic used by the kingdom of darkness to divide ministry families, as well as to take down ministers of the gospel. The temptation to remain angry without biblical cause can sink the most faithful in the kingdom. Therefore the Lord instructs “… let every man be swift to hear, slow to speak, slow to wrath, for the wrath of man does not work the righteousness of God (James 1:19-20).

My encouragement to you is when angry, be swift to hear from God in prayer, as to if you have a valid and godly reason. If you do, then seek and wait for His solution. If you have no biblical reason, deny your pride, arrogance and preference and move forward walking in love. Anger in and of itself is not sinful, but must be expressed in the context of God’s will and always through the self control that is part of the fruit of the Spirit (Galatians 5:22). If not walked out in this manner, we are headed for trouble. Consider this quote found in Chuck Swindoll’s “Ultimate Book of Illustrations and Quotes”.

Anger won’t fix itself… same as a flat tire or a dirty diaper. I remember reading about an eagle that swooped to the ground one day, catching a weasel in its powerful talons. But when it flew away, its wings inexplicably went limp, and it dropped to the ground like a lifeless doll. As it turned out, the weasel had bitten its attacker in mid-flight, killing the proud eagle as it flew. If we cling to a attitude of anger (without biblical cause)…, it will, like the weasel, sink its teeth into us when we least expect it.

Mike is a pastor with The Assembly of God Fellowship. He is the lead pastor at Encounter Church in Fostoria Ohio. His desire is to encourage the Church of Jesus Christ, and declare God's hope through His Son Jesus, to a world which is long on excuses and short on hope. Mike has experienced the truth that when we kneel before Christ, surrendering to Him as Savior and LORD, being led and empowered by His Spirit. To Jesus Christ be all glory and honor.
View all posts by Michael J Erdel →
This entry was posted in Be angry and do not sin, biblical anger, do not be angry with a cause, Matthew 5:21-22, righteous anger, Uncategorized. Bookmark the permalink.