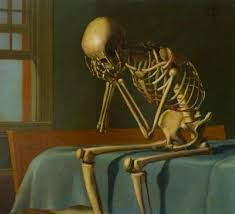 Bones are not the most attractive thing to look at. Whether viewed as a single bone or in the entire collective of a skeleton, bones just are not pleasing to most eyes. They are rigid, plain in color-like parchment and generally not very appealing to look at. Let’s be honest, who would not rather look at well formed muscles or  talk about the artistic or athletic movements, attributed to a well developed physique. What usually gets lost is that an appealing physical form and ability is impossible without good, solid and functioning bones. Despite this being true, bones are so often over to make any ordinary skeleton sad.

Yet have a problem with “them bones”, even though they are hidden for the most part, and see the physical life and its actions effected adversely. Consider the strong coal minor, whose arms were thick and well muscled through working years lifting and working with coal. During a mine collapse his upper arm was injured requiring multiple surgeries. After many unsuccessful attempts to repair the humerus (large upper arm bone), they had to remove the bone. Being this occurred decades ago, there were not any available means of synthetic bone implants. As he tried to go back to work, he could pick nothing up, for movement needs strong muscle, but also a rigid lever to pull upon, in order to move. The rigid lever is BONE! It was not until the man was given a rigid iron sleeve (exo-skeleton), placed over the upper and lower arm, that he could use his arm at all.

The point, without the rigidity of them bones, we would be useless blobs of skin and tissue, unable to speak, blink, move, react or respond. Bones are absolutely essential, even though we often forget about them entirely, until there is a problem. So why the foray into orthopedic territory? Because we Christians have had a spiritual bone issue from the beginning of the church that we often ignore. It is one of the reasons for our ineffective ministry in America. Let us read the word of God.

(II Timothy 4:1-5) I charge you therefore before God and the Lord Jesus Christ, who will judge the living and the dead at His appearing and His kingdom: Preach the word! Be ready in season and out of season. Convince, rebuke, exhort, with all longsuffering and teaching. For the time will come when they will not endure sound doctrine, but according to their own desires, because they have itching ears, they will heap up for themselves teachers; and they will turn their ears away from the truth, and be turned aside to fables. But you be watchful in all things, endure afflictions, do the work of an evangelist, fulfill your ministry.

The time described above, is upon us. In America Churches which stick to preaching, teaching and living the implications of sound doctrine are few and far between. This is not to say that there are not ministers who teach good solid doctrine in church meetings and pod casts and on the internet; there are. The problem is that teaching sound doctrine, without convincing, rebuking, and exhorting in suffering (or patient and continual modeling), is pretty much useless. Sound doctrine takes scriptural leaders, which know the flock up close and personal.

This is impossible with the megachurch modalities most desire, because true discipleship, including repeated building of the faith through the presentation of sound doctrine, is too time consuming and labor intensive for most ministers. Therefore, the body of Christ is not built properly and is unable to move in submission, in the power of the Holy Spirit. Replacing sound doctrine are messages and teaching about being better people, building relationships with God and others and serving our communities.

So what could be wrong about that? How about the fact that none of those particulars are clearly taught as sound doctrine, but are American Christian colloquialisms, which are more appealing to the lost around us. Again what can be wrong with that? How about we are not to starve the children of God of sound doctrine, so that the world around us thinks we are cool and just like them. We are not. When reading the New Testament we find that much of it is spent teaching…

2 Timothy 4:3-4 3 For the time will come when they will not endure sound doctrine, but according to their own desires, because they have itching ears, they will heap up for themselves teachers; 4 and they will turn their ears away from the truth, and be turned aside to fables.

“according to their own desires, because they have itching ears, they will heap up for themselves teachers”, simply refers to congregations desiring teaching that aligns with their preferences, rather than Holy Spirit anointed teaching and training, which grows them in the Christ life. Teaching in this state can be things like end-times or spiritual gifts or even love and forgiveness, but made a focus so much, it diminishes the most essential teaching and actions of the faith. Teaching in this state, can be overblown polled topics which are meant to prove Christians are fun or like everyone else.

The point being, ministers need to stick to sound doctrine no matter the cost. We have heard far too often that “doctrine divided” in a negative connotation. It is true doctrine divides, just as the gospel does (Matthew 10:34-37), but it is necessary division: the wheat from the chaff.  Truth be told, sound doctrine will never divide the true church, but draw it together in unity. Without “them bones” of doctrine, with their rigidity, boundaries, strength and steadying, the church is unable to move by the leading and power of the Holy Spirit. With “them bones” we just might find Christ seated in the midst of our fellowship.