Romans 1:24-25 Therefore God also gave them up to uncleanness, in the lusts of their hearts, to dishonor their bodies among themselves, who exchanged the truth of God for the lie, and worshiped and served the creature rather than the Creator, who is blessed forever. Amen.

As we consider the repetition necessary for a lie to be believable, we must understand how “the LIE”, and its subsequent wickedness has been transmitted repeatedly, from the time of Babel.

It is clear that Satan’s deception was birthed in the Garden of Eden, where he to suggested to Eve, that God was not what He presented Himself to be. It was not until after the flood that we see, “the LIE” in a world culture and religious form, as it is still presented today. We find in humanity’s rebellion at Babel, that Satan reframed “the LIE” to lay hold of the mind and heart of humanity.

We discover in Genesis 11, that under the leadership of Nimrod, humanity defied God’s command to be fruitful and multiply and fill the earth (Genesis 9:1-6). They gathered in one place (Babel) and decided they would build a tower so high, that no flood would overwhelm it. In their intention, we can see how Satan had led them to believe (in error) God would break His promise never to flood the earth again.

In the LORD confusing the languages, we see humanity spread out over the known world, with Nimrod’s false religion of multiple gods (with the fallen angelic watchers), would lead the fight against the malicious and distant Creator, who only wanted to oppress man with His commands.

Because of the confusion of the language, people groups would name these false gods after their own language. Interestingly, if one researches well enough pagan world religions, they will find that although names of gods would change, their character remained similar, nation to nation and people to people. In almost every pantheon the native people worshiped lesser gods, who were considered reachable and active in humanity; where the Creator is distant and only interested in oppressing humanity.

In almost every pantheon there is a similar narrative where the lesser gods, sought to free humanity from the tyranny of the Creator, or provide where He selfishly withheld. In all of them we see the contempt of the kings and rulers against almighty God in Psalm 2.

A little disciplined research will reveal that the multiplicity of gods in the Egyptian, Hindu, Canaanite, Native American, Norse, Celtic, Greek and Roman pantheons, are often interchangeable. Satan has been very effective in using this “LIE” to turn humanity against the LORD.

Psalms 2:1-3 (NKJV) ​ Why do the nations rage,
And the people plot a vain thing?
The kings of the earth set themselves,
And the rulers take counsel together,
Against the LORD and against His Anointed, saying,
“Let us break Their bonds in pieces
And cast away Their cords from us.”

Since Babel, “THE LIE” has been repeated to the world’s population, but there has been little unity among them because of national and language barriers, until a man conquered much of the civilized world by the time of his death in 332 B.C. That man was Alexander the Great.

The importance of his conquest is that Greek became the language of trade for most of the world. People were again connected through learning a common language. In this state, people began to see how their regional or national gods were just like those of their enemies.

Once more “the LIE” began to gain influence. With the advent of the Roman empire, which took control of and expanded upon Alexander’s territory and influence (as far north as the Celtic and Norse pantheons, and as far east as China and India’s multiplicities of deities), we begin to see a synchronization of “the LIE”. This was unchecked until the incarnation of our Lord Jesus Christ. 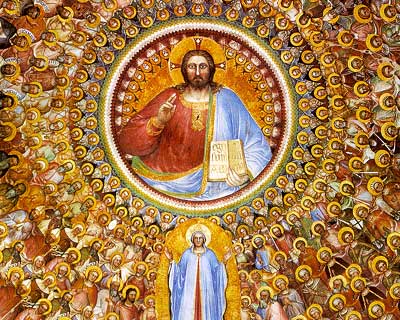 From the time of the Lord’s death and resurrection, until the rise of the Roman Catholic Church, we see humanity awaken to “the Truth” of the Messiah. Even in Rome, by 325 AD, we see the gods and “the LIE” surrounding them losing effect and influence.

Sadly, with the corruption of the church of Jesus Christ, in the rise of Roman Catholicism, we see the old god’s gaining ground through apostate Christianity, where idol worship returned, with Christian names. The image above is that of the Catholic saints in a setting eerily similar to that of the Greek gods above.

With the reformation, we see a resurgence of truth, until the rise of masonic thought with Sir Francis Bacon’s “New Atlantis”, which gave rise to Masonic influence, through syncretism of religions. Sadly this masonic movement found its footing in more than a few of the founders of the United States, who were devotees of Sir Francis Bacon and believed America to be the fulfillment of the New Atlantis. The image to the right is that of “The Apotheosis of George Washington”, where he sits in the seat of Zeus/Jupiter, while he is surrounded by the Roman versions of the Greek gods. This picture is in the dome of the capital building in Washington D.C.

“The LIE” flourished in the elite political class of America unnoticed, while evangelical Christianity grew in the populace alongside of it. In this environment, “the Lie” was seen in the syncretism of spiritism, Native America spirit worship, the rise of the occult and the growing influence of the Roman Catholic Church, in the later part of the 1800’s even up to our current time.

One need only to read Revelation 18 and see the concerning similarities between the end times economic and governmental Babylon and history and current state of America.

Revelation 18:1-8 (NKJV) After these things I saw another angel coming down from heaven, having great authority, and the earth was illuminated with his glory. And he cried mightily with a loud voice, saying, “Babylon the great is fallen, is fallen, and has become a dwelling place of demons, a prison for every foul spirit, and a cage for every unclean and hated bird! For all the nations have drunk of the wine of the wrath of her fornication, the kings of the earth have committed fornication with her, and the merchants of the earth have become rich through the abundance of her luxury.” And I heard another voice from heaven saying, “Come out of her, my people, lest you share in her sins, and lest you receive of her plagues. For her sins have reached to heaven, and God has remembered her iniquities. Render to her just as she rendered to you, and repay her double according to her works; in the cup which she has mixed, mix double for her. In the measure that she glorified herself and lived luxuriously, in the same measure give her torment and sorrow; for she says in her heart, ‘I sit as queen, and am no widow, and will not see sorrow.’ Therefore her plagues will come in one day—death and mourning and famine. And she will be utterly burned with fire, for strong is the Lord God who judges her.

Revelation 18:9-18 (NKJV) “The kings of the earth who committed fornication and lived luxuriously with her will weep and lament for her, when they see the smoke of her burning, standing at a distance for fear of her torment, saying, ‘Alas, alas, that great city Babylon, that mighty city! For in one hour your judgment has come.’ “And the merchants of the earth will weep and mourn over her, for no one buys their merchandise anymore: merchandise of gold and silver, precious stones and pearls, fine linen and purple, silk and scarlet, every kind of citron wood, every kind of object of ivory, every kind of object of most precious wood, bronze, iron, and marble; and cinnamon and incense, fragrant oil and frankincense, wine and oil, fine flour and wheat, cattle and sheep, horses and chariots, and bodies and souls of men. The fruit that your soul longed for has gone from you, and all the things which are rich and splendid have gone from you, and you shall find them no more at all. The merchants of these things, who became rich by her, will stand at a distance for fear of her torment, weeping and wailing, and saying, ‘Alas, alas, that great city that was clothed in fine linen, purple, and scarlet, and adorned with gold and precious stones and pearls! For in one hour such great riches came to nothing.’ Every shipmaster, all who travel by ship, sailors, and as many as trade on the sea, stood at a distance and cried out when they saw the smoke of her burning, saying, ‘What is like this great city?’

It makes Christians in America emotionally agitated to suggest that the nation in which we live, could be anything other than  benevolent at heart. Although the weight of historical evidence and the cultural perversion that has grown unchecked is weighty evidence, I admit, that I too am grieved by the implications of what I have written. Despite my desire to hold on to what I was taught, we must for the sake of truth, throw off nostalgic views and refuse to make the mistake Israel made.

They believed themselves special, as a nation, no matter what they did. Although this is true of the remnant, it is not true of all born in Israel (read Romans 9, 10, 11). In fact, the same warning the Lord gave to them ought to cause true followers of Jesus Christ to pray for repentance in His church in America.

Ezekiel 16:48-50 (NKJV) “As I live,” says the Lord GOD, “neither your sister Sodom nor her daughters have done as you and your daughters have done. Look, this was the iniquity of your sister Sodom: She and her daughter had pride, fullness of food, and abundance of idleness; neither did she strengthen the hand of the poor and needy. And they were haughty and committed abomination before Me; therefore I took them away as I saw fit.

It is important we investigate one more cultural phenomenon, which is effectively reframing Satan’s “LIE” in our current time. In the last days, there needs to be a cogent mechanism to transmit the great deception against the the LORD. That method is superhero comic book films.

Mike is a pastor with The Assembly of God Fellowship. He is the lead pastor at Encounter Church in Fostoria Ohio. His desire is to encourage the Church of Jesus Christ, and declare God's hope through His Son Jesus, to a world which is long on excuses and short on hope. Mike has experienced the truth that when we kneel before Christ, surrendering to Him as Savior and LORD, being led and empowered by His Spirit. To Jesus Christ be all glory and honor.
View all posts by Michael J Erdel →
This entry was posted in Uncategorized and tagged Greek Gods, II Thessalonians 2:1-12, masons, native America spirit worship, pantheon, Roman Catholic Church, Roman Gods, Romans 1:24-25, the lie, the truth. Bookmark the permalink.