CONVERTED AS A CHILD 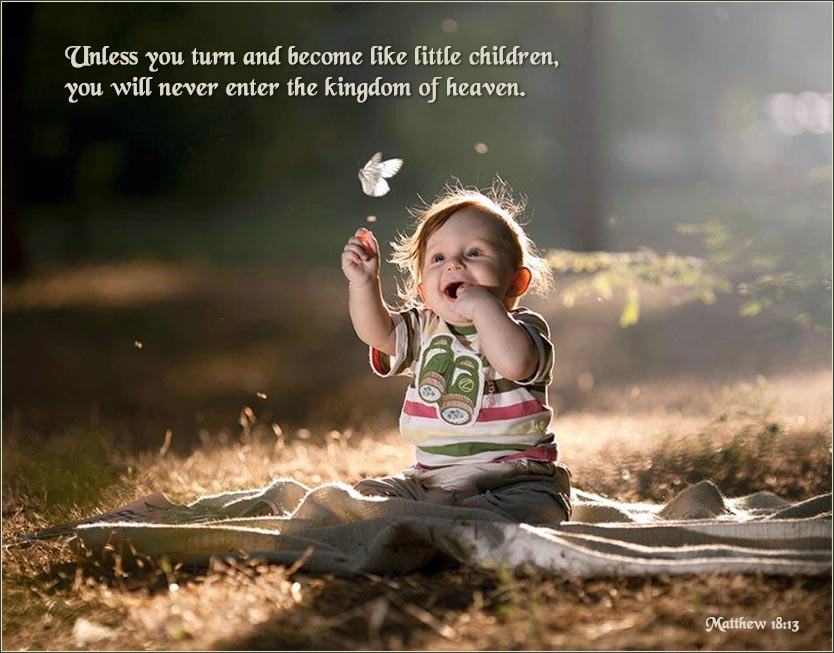 As I have indicated many times before, we can be so familiar with a passage of scripture that we take for granted we understand its meaning. We also can take for granted that we are living it out as God intended.

The above passage is one of many, where familiarity can produce a lack of consideration of the scripture’s meaning and impact, in how we relate to God. In this familiarity we limit the passage’s scope, by relegating them to poetic metaphor.

When the Lord Jesus declared “Assuredly, I say unto you, unless you are converted and become as little children”, we understand He was not commanding we regress to the physicality or mental acuity of a child. So, in that understanding it is a metaphor.

Despite this reality the Lord is communicating we choose to give up something very adult about ourselves… Our independence and personal sovereignty.

How this relates to our being “converted” and becoming as “little children”, means to completely turn from one disposition (that of an adult) to another (that of a child). When considering conversion, we understand it means to turn oneself from their course.

This idea lines up with the reality of the need for repentance in a person’s life. To choose to be “converted” means a person has godly sorrow, which leads to repentance, which is a turn or change of mind, leading to a change in behavior. We may hold that conversion to becoming as “little children” is a fruit of repentance.

It is important we get to the bottom of what our Lord Jesus means when He declares we be converted and become as “little children”.

In the first place, “little children” refers to those who are infant well before teen age, with the caveat, that we pass through stages of spiritual development (I John 2:12-14); although always having the disposition of a little child to their father.

What is the disposition of “little children”?

In my home, my wife and I have been blessed to have children at all stages of growth and development, for most of our 23-year marriage. At currant hour our six children range from 22 months old to almost 23 years old. Considering their differing personalities and individual natural tendencies, we can agree there are similarities in their childhood dispositions.

These dispositions are generally true of children

In the first place, “little children” are completely dependent on their parents. This means they know who to go to when they are in need, which is almost all day, every day. Any attentive parent understands that children need supervision and provision. This means limits need to be set, as well as a means for them to petition when they feel a need. Children are naturally inclined, as well as socialized from first breath to let someone know when they are in need (dependent).

Interestingly this works differently in different children. My son Elijah, at six years old, is constantly asking Mommy and Daddy for food, things to play with, permission to watch a video, and many other things. He knows that he is not allowed to get what he wants but needs to ask.

Our 22-month-old is dependent, but in a way needed to become aware of that. She is very independent minded and for a while would take what she thought she needed, and do what she wanted to do, until we began to influence her toward dependance, through discipline, because what she wants often is unnecessary for her or dangerous.

Through setting up boundaries and protocols for her, she has begun to ask permission and seek us out when she feels she need something. Little Elena Grace is just as dependent as Elijah but needed to understand that. She has always been dependent but needed to learn to walk that out. We are not only to acknowledge our dependence upon God but embrace it moment by moment.

As I have been a substitute teacher, I have had many rude awakenings to how poor parenting has become, with its accompanying result of disrespectful and confused children. What I have learned among the children of all ages is that if they receive a steady, consistent boundary, with a person who is in authority, they’ll respond with humility.

The second dispositional trait of a child is to humble themselves to authority. To be humble is to place oneself beneath another, bowing low.

Often, a “little child” with hyper tendencies or poor attitude toward authority, will become pliable and obedient, when they receive good consistent boundaries and appropriate discipline. Why is this the case? Because children desire to be close to authority figures (especially parents), feeling love and safety.

This is the reason police officers are often revered by children. Good, loving, authority by a father brings out this “little children” dispositional element.

In the raising of our 6 children, we have had little difficulty fostering humility among our children. This arises from the reality that children are smaller than their parents and have appetites which they cannot meet. When little children ought to be humble in their dependency, but react selfishly, it is the parent who teaches them appropriate protocols, gaining humility through appropriate discipline.

This correction could be a stern voice, a swat on the rear, or other appropriate measures. The whole point is to teach them the right approach to life. When these measures are consistent, the child exhibits a willful and loving humility, feeling their dependance upon their parents and embracing that. Knowing our dependence upon God for what is needed for life and godliness, we are to seek to remain humble under God’s leading.

Truth be told, even in my older children, they inherently trust that their father will always tell them the truth. It is for this reason, they believe the truth of the Gospel, whether they walk in it as they grow up, is a matter of how they are “converted and become as little children” in relation to God. Do we struggle to take God’s word and His promises as they are in truth, or do we trust it inherently, without cynicism?

The final trait of “little children” in their natural disposition is their innate sense of empathy and compassion for those who are hurting or in need around them. This is less visible at times among those who are only children, but, when a child notices another child in tears, fears or anxieties, they will seek a way to comfort.

Like all these traits, compassionate empathy toward those who are hurting, is marred by the fall in our humanity, but it is still visible in most children. I can recall many times where my children, at a very early age, move to comfort their mother, or father, or siblings when they sense a change in the demeanor of that person. We are to be as “little children” in how we hurt for those all around us.

IS THIS HOW WE RELATE TO OUR GOD AND FATHER?

It is important to remember that we are children of God in the Lord Jesus Christ, but also to understand that our natural old man, is contrary to everything that is in the disposition of “little children”. When we consider how our culture teaches us to be all we can be for ourselves and to do as we will, which is the whole of the law of the world, we begin to understand the uphill battle faced in converting and becoming as “little children” in our disposition.

How much is enough of these qualities?

This can simply be answered by asking another question… How much of ourselves are we required to love God with? Quite simply, we must choose to take on this disposition of absolute dependency, absolute humility, absolute faith, and absolute commitment to aid others in knowing Him.

Remember that this disposition is not a burden of our proving it practically, but one of commitment in the heart and mind. To know ones dependance on God for salvation, sanctification, provision, and protection, brings humility toward God and His will, which produces loving submission—This humility and loving submission to His will (found in the word of God) transforms how we see life and brings unfettered trust of God—This unfettered trust of His word transforms how we see and interact with those around us, engendering Christ’s supernatural compassion through us.

All these “little children” elements of disposition can be seen in the Lord Jesus Christ.

We must remember that Christ’s “little child” disposition, in relationship to our Father, was lived out throughout His life. Our Lord Jesus Christ did only what He was led to do, by the Holy Spirit—He humbled Himself for the will of God culminating In His vicarious death on our behalf (Philippians 2:5-10)—He always obeyed the word of God despite painful personal circumstances—Therefore He was always ego-effacing.

How much of this “little children” conversion should we have? Perhaps a few scriptures will aid us in answering that finally.

(1 John 4:17) Love has been perfected among us in this: that we may have boldness in the day of judgment; because as He is, so are we in this world.

(Philippians 2:5-10) Let this mind be in you which was also in Christ Jesus, who, being in the form of God, did not consider it robbery to be equal with God, but made Himself of no reputation, taking the form of a bondservant, and coming in the likeness of men. And being found in appearance as a man, He humbled Himself and became obedient to the point of death, even the death of the cross. Therefore, God also has highly exalted Him and given Him the name which is above every name, that at the name of Jesus every knee should bow, of those in heaven, and of those on earth, and of those under the earth, and that every tongue should confess that Jesus Christ is Lord, to the glory of God the Father.

How important is it we can affirmatively answer if we have chosen the disposition of a “little child”? Jesus let us know in our passage.

Then Jesus called a little child to Him, set him in the midst of them, and said, “Assuredly, I say to you, unless you are converted and become as little children, you will by no means enter the kingdom of heaven.

Mike is a pastor with The Assembly of God Fellowship. He is the lead pastor at Encounter Church in Fostoria Ohio. His desire is to encourage the Church of Jesus Christ, and declare God's hope through His Son Jesus, to a world which is long on excuses and short on hope. Mike has experienced the truth that when we kneel before Christ, surrendering to Him as Savior and LORD, being led and empowered by His Spirit. To Jesus Christ be all glory and honor.
View all posts by Michael J Erdel →
This entry was posted in Uncategorized and tagged Christian living, converted and become as little children, humilty, Matthew 18:1-5. Bookmark the permalink.