When I come… will there be FAITH? 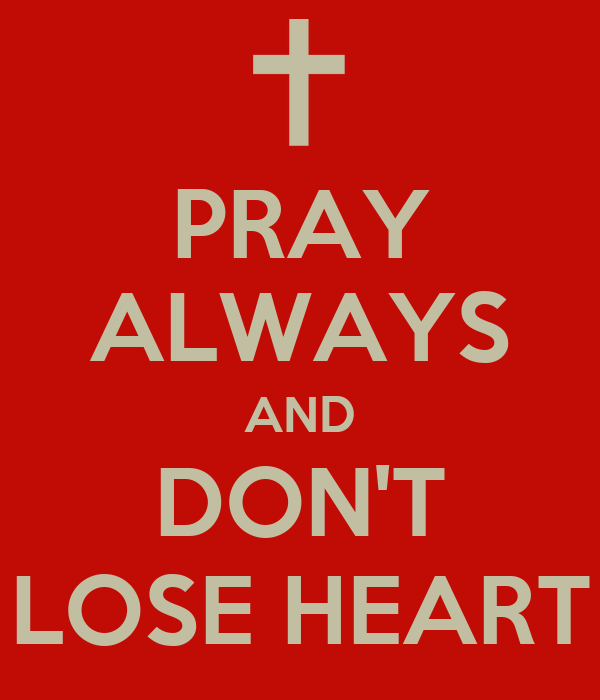 (Luke 18:1-8 NKJV) ​1 Then He spoke a parable to them, that men always ought to pray and not lose heart, 2 saying: “There was in a certain city a judge who did not fear God nor regard man. 3 Now there was a widow in that city; and she came to him, saying, ‘Get justice for me from my adversary.’ 4 And he would not for a while; but afterward he said within himself, ‘Though I do not fear God nor regard man, 5 yet because this widow troubles me I will avenge her, lest by her continual coming she weary me.'” 6 Then the Lord said, “Hear what the unjust judge said. 7 And shall God not avenge His own elect who cry out day and night to Him, though He bears long with them? 8 I tell you that He will avenge them speedily. Nevertheless, when the Son of Man comes, will He really find faith on the earth?”

We live in extraordinary times. Daily we see the world heading towards the fulfillment of the words of Jesus the Christ, from the Gospels all the way to revelation, concerning the events and happenings preceding His visible return to this earth, where He gathers His church to be with Him and puts down the wicked of the world at Armageddon.

We understand that those events contain wars and rumors of wars, pestilence, earthquakes all over the world, and famine. We understand that the oceans will roar, and the powers of the heavens will be shaken, and men’s hearts will fail them for fear. We understand that Christians will be hated by all nations. Regardless of where one stands concerning the timing of the rapture, we can generally agree with the difficulties of the times we live in. It is for this reason Jesus spoke the parable of the widow and the unjust judge.

In addition to these realities, the Lord Jesus Christ also understands the nature of the weakness of our flesh—the powers at work against us and the difficulty we experience in continuing in faith, when the going gets more than untenable.  It is for this reason Jesus spoke the parable of the widow and the unjust judge.

As stated previously, our Lord understand the difficulty we face when it appears all hope is lost, and our only apparent options will pummel us with pain and loss. He understands from personal experience, as Hebrews 4:15-16 reveals “For we do not have a High Priest who cannot sympathize with our weakness, but was in all points tempted as we are, yet without sin. Let us therefore come boldly to the throne of grace, that we may obtain mercy and find grace to help in time of need”.

Verse 1 reveals our Lord Jesus spoke this prayer that men ought always to pray and never lose heart. It is noteworthy that pray is not defined as hearing from or speaking to God, interceding or supplicating for others, or crying out for personal provision. I believe His intent includes all of the above, but even more that we would never lose heart to seek the Lord and engage with His presence in relational discourse, by faith.

Given the nature of the hour we live in and the purpose for Jesus speaking this parable, it is very important that we seek to answer the question posed by our Lord in verse 8 “Nevertheless, when the Son of Man comes, will He really find faith on the earth?” In seeking to answer this question as a means of working out our salvation in fear and trembling, we will learn a few things.

We will learn that the unjust judge communicates something about the character of God, and that the widow communicates something lacking in us. We will consider the very real risk of losing endurance in our faith, in these last days of growing apostacy. Hopefully we will be grounded further in perseverant and importunate and faithful praying. May we all consider the contents of this teaching as if our faith and relationship to God depended on laying hold of the purpose of the parable, because it does.

THE UNJUST JUDGE AND THE WIDOW

In this parable the widow petitions the judge to get justice for her. It appears the widow has a lawful case, but the judge refuses to do what is according to the law. Eventually he does rule in her favor, not because of right motives, nor because he feared the eventual righteous judgment of God, for his improper discharge of authority. He finally moved because the woman kept coming to him over and over and over again, face to face. He was sick of her and knew she would never quit coming. She was persistent, to the point of annoyance.

On a side note, we ought to regard the disposition of the judge, for we who have been so blessed by God, should not need to be pounded with conviction by the Holy Spirit, or the sight of great need over and again, to be moved with compassion. It is easy for us to become calloused to the needs of others and justify inaction, because of the enormity of so many needs or that some appear to work the system. Regard the word of God.

(1 John 3:17 NKJV) 17But whoever has this world’s goods, and sees his brother in need, and shuts up his heart from him, how does the love of God abide in him?

In verse 6 our Lord calls us to “Hear what the unjust judge says”. This is a challenge to us to compare the unjust judge and His need for continual pressure, to our benevolent Father, who requires no such pounding plea. Because we are in Christ, we simply go to Him in faith and ask according to His will, knowing we will receive an answer (I John 5:14-26). This reveals the wonderful character of God to those who are His children, through the Lord Jesus Christ.

(Luke 11:9-13 NKJV)9 “So I say to you, ask, and it will be given to you; seek, and you will find; knock, and it will be opened to you. 10 For everyone who asks receives, and he who seeks finds, and to him who knocks it will be opened. 11 If a son asks for bread from any father among you, will he give him a stone? Or if he asks for a fish, will he give him a serpent instead of a fish? 12 Or if he asks for an egg, will he offer him a scorpion? 13 If you then, being evil, know how to give good gifts to your children, how much more will your heavenly Father give the Holy Spirit to those who ask Him!”

God’s character is faithful and…

“And shall God not avenge His own elect who cry out day and night to Him, though He bears long with them? 8 I tell you that He will avenge them speedily.”

Concerning His avenging us speedily, it simply means He will answer us with great speed, without hesitation. This ought to cause us great rejoicing, but alas there is a problem, especially when we enter times of great trial. Our problem is that God’s “speedily”, is not our “speedily”.

Our “speedily” needs to be adjusted, because we often think that it is according to our time, but remember God is eternal, He has no clock (II Peter 3:8-11).

(2 Peter 3:8-12 NKJV)8 But, beloved, do not forget this one thing, that with the Lord one day is as a thousand years, and a thousand years as one day. 9 The Lord is not slack concerning His promise, as some count slackness, but is longsuffering toward us, not willing that any should perish but that all should come to repentance. 10 But the day of the Lord will come as a thief in the night, in which the heavens will pass away with a great noise, and the elements will melt with fervent heat; both the earth and the works that are in it will be burned up. 11 Therefore, since all these things will be dissolved, what manner of persons ought you to be in holy conduct and godliness, 12 looking for and hastening the coming of the day of God, because of which the heavens will be dissolved, being on fire, and the elements will melt with fervent heat?

The passage above was written to deal with the seemingly long passage of time, between Christ’s ascension into heaven and His promise to return. In that day, as our day, scoffers were mocking and suggesting that Christians had missed the Day of the Lord’s return. Into this context we find “that with the Lord one day is as a thousand years, and a thousand years as one day”.

This was not stated to define God’s clock, but to remind us that His eternality is beyond our grasp. To our Father, the death of His Son was as it was only two days ago. The atonement, in Christ’s cross and resurrection are enteral truths that are eternal actions; as the Lord Jesus Christ is the Lamb slain before the foundation of the world (I Peter 1:17-25). It is for this reason that the cross of Christ will continue to save until He comes, whether it is in 5 minutes, 5 years, 10 years or 50.

So, we see that God Himself is faithful, but because of our finite nature, where time is all we have ever known, we must learn the character of the persistent widow, for losing heart is a real risk. Especially given the times we are in.

Remember that she went persistently, every day to the unjust judge. Perhaps she thought is was to remind him of his responsibility. We know with our God this is not the case. He needs no reminder of His exceedingly great and precious promises. The reason for our persistence is more about us reminding ourselves of God’s faithfulness, in what we see as extended delays.

In our next post we will consider the context of some well-known passages of scripture, as we seek to mitigate the risk of losing heart in our call to pray always.