Over the last few days, I’ve seen posts to my FACEBOOK time line concerning the impeachment of president Donald Trump. One group of posts support him, while tearing down the (often in mockery) leaders seeking to impeach him, as well as those in favor of impeachment. On the other side I’ve seen posts tearing down and mocking the president and those supporting him. The bulk of these posts come from those who would proclaim to be followers of Jesus Christ. It is not my intention to question the integrity of their confession, but ask us all to consider our rhetoric and misplaced passion. We have forgotten our own history. During the Civil War, where over 600,000 Americans were killed, both sides used God as a pretext for their cause; sadly, we are seeing this again.

As Christians we are called to respect authority, not rail against it, whether it’s congressmen, senators, or a president we disagree with.

Jude 1:8-11 8 Likewise also these dreamers defile the flesh, reject authority, and speak evil of dignitaries. 9 Yet Michael the archangel, in contending with the devil, when he disputed about the body of Moses, dared not bring against him a reviling accusation, but said, “The Lord rebuke you!” 10 But these speak evil of whatever they do not know; and whatever they know naturally, like brute beasts, in these things they corrupt themselves. 11 Woe to them! For they have gone in the way of Cain, have run greedily in the error of Balaam for profit, and perished in the rebellion of Korah.

I was raised to engage our political system appropriately and I have strong opinions about the current governmental situation, but my responsibility is to keep my eyes on Christ, consumed by His will and command, as a soldier of the cross.

2 Timothy 2:1-4 ​1 You therefore, my son, be strong in the grace that is in Christ Jesus. 2 And the things that you have heard from me among many witnesses, commit these to faithful men who will be able to teach others also. 3 You therefore must endure hardship as a good soldier of Jesus Christ. 4 No one engaged in warfare entangles himself with the affairs of this life, that he may please him who enlisted him as a soldier.

This is a very important concept: How can a soldier of Christ focus on carrying out the orders given by the word of God, through the Holy Spirit, moment by moment, if they be consumed with the affairs of this life? They cannot, no more than a soldier in the U.S. marines, should they be wasting time dropping their opinions and proving their political points. It is silly to me, but it seems we would rather be politically moral pundits arguing our points ad nauseum, then soldiers of Jesus Christ, making a difference.

Consider that an encouragement for a brother in Christ in this hour, may be undone with a cynical political post or tweet in the next hour. We Christians are called to proclaim the good news of Jesus, not our anxieties about being railroaded or run over politically.

Praise the Lord! Praise the Lord, O my soul! While I live I will praise the Lord; I will sing praises to my God while I have my being. Do not put your trust in princes, Nor in a son of man, in whom there is no help. His spirit departs, he returns to his earth; In that very day his plans perish. Happy is he who has the God of Jacob for his help, Whose hope is in the Lord his God, Who made heaven and earth, The sea, and all that is in them; Who keeps truth forever, Who executes justice for the oppressed, who gives food to the hungry. The Lord gives freedom to the prisoners. The Lord opens the eyes of the blind; The Lord raises those who are bowed down; The Lord loves the righteous. The Lord watches over the strangers; He relieves the fatherless and widow; But the way of the wicked He turns upside down. The Lord shall reign forever— Your God, O Zion, to all generations. Praise the Lord!

All the things that Psalm 146 says concerning God, He Himself does. These are the very things we are expecting human political savior’s to do. Once more, we do not regard the world’s political history. There is no utopia, or Christian nation, or paradise to come, until Christ Himself arrives bodily to bring in His kingdom.

Revelation 19:11-16 Now I saw heaven opened, and behold, a white horse. And He who sat on him was called Faithful and True, and in righteousness He judges and makes war. 12 His eyes were like a flame of fire, and on His head were many crowns. He had a name written that no one knew except Himself. He was clothed with a robe dipped in blood, and His name is called The Word of God. And the armies in heaven, clothed in fine linen, white and clean, followed Him on white horses. Now out of His mouth goes a sharp sword, that with it He should strike the nations. And He Himself will rule them with a rod of iron. He Himself treads the winepress of the fierceness and wrath of Almighty God. And He has on His robe and on His thigh a name written: KING OF KINGS AND LORD OF LORDS.

Seems to me that many of the posts coming from Christians, are written because of fear or anxiety about living in a world that does not resemble what we want. Reading Psalm 146:3 it becomes clear. There is no human that will save this country or preserve your idea of what it ought to be. As all nations, it is a drop in the bucket to the LORD (Isaiah 40:15). It will suffer the fate of all nations, when Jesus returns (read Revelation 19). So to all my FACEBOOK friends whether you are supportive of the president or believe he needs to be impeached…

“Do not put your trust in princes, nor in a son of man, in whom there is no help”. 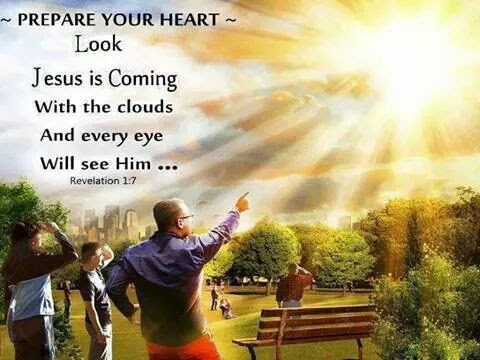